Owning a PlayStation offers plenty of fun which is also sometimes known to bring families together. Since PlayStation falls under the categories of consoles, it usually requires you to hook it up with a television set and speakers to properly enjoy various gaming titles.

Most of these gaming titles still do not have official releases on other platforms and are exclusively available to the consoles because it offers smoother gameplay even on high settings.

You could also connect these consoles with the internet to enjoy multiplayer games and to participate in local tournaments. Additionally, you could also save your game states and carry them with you on compatible memory cards to reconnect and resume from where you left off.

The charm of the classic games from the second generation of PlayStation (PS2) is still admired by many. Thus, for those who’d like to play these games again but don’t have the consoles anymore, could use a thing called an emulator.

What emulators do is that they simulate an environment on which games could be loaded and played. The most optimal emulator available in the market is the PCSX2 Emulator, which is capable of running most of the PS2 titles on different platforms with ease and reliable stability. 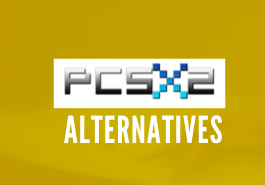 Some best alternatives to PCSX2 Emulator for PS2

There are a couple of good alternatives available in the emulator market that can compare with the PCSX2 Emulator and could very well surpass it in terms of features and other services.

This is one of the early made PS2 emulators offering a user-friendly GUI and full-screen gameplay. You’ll get full sound support on PC along with support for the joystick and DirectX graphics. It allows you to take screenshots in two extensions namely JPG & BMP. PS2emu also lets you use the memory card for saving and loading game states.

Overall, the PS2emu provides great graphics despite its age and limited coding. You might be required to use the BIOS file to boot it up.

It is one of the oldest emulators on the market because it’s been launched nearly sometime after the release of the first generation of PlayStation consoles. It is known to provide good audio and graphics support with a wide array of gaming titles from both PS1 and PS2 consoles. You shall need a supporting BIOS and ROM(s) to run the games and it’s a bonus that ePSXe allows you to play using controllers so you can multiplayer with your friends and family.

There are additional tweaks that will help you improve your gaming performance by a few notches so that you don’t miss anything even if you play on different mediums.

The PPSSPP Emulator is probably the most famous of the bunch because it has over a million downloads worldwide. This zippy emulator supports all PS1 & PS2 games natively by emulating a PlayStation system environment on your devices such as Mac, Android, Windows/PC, and Linux.

It lets you fiddle with the system’s graphics using several tools such as anisotropic filtering, upscaling texture, and upscaling resolution which together help the games run in High Definition with studio-quality sound. Additionally, you can also save your game states and carry them to be resumed later at any sooner or distant time.

The NeutrinoSX2 works nearly the same as the popular PCSX 2 and it is available under an open-source. It can play cool games such as Blade 2 and Mortal Kombat 5 but it does require the GTK Runtimes to properly function. It’s still under construction which means running commercial games will definitely be a pickle. If you could overlook that then to run it smoothly at max settings, you’ll need to have at least the Intel Pentium 4 2.0 GHz (or AMD XP), 512 MB RAM, 5 MB free disk space (for nsx2) and 200+ MB free swap space.

It aims at providing High-Quality sound emulation with support for saving game states which is surprising for something so stable even though it’s incompletely written. The optimized performance is fast and paired with a friendly GUI and Full-Screen Gameplay, you can still have a good time on your PC by playing PS2 titles.

These fantastic emulators pave the way for console gaming on various platforms and provide controller support too whilst being efficient in both graphics and sound department. The various features only add to their functionality and attract more users as well as developers who then share it with peers.

Any of these emulators can be the best alternative to the PCSX2 Emulator for PS2.